“Just follow the dog – He’ll lead us back to the cabin.” 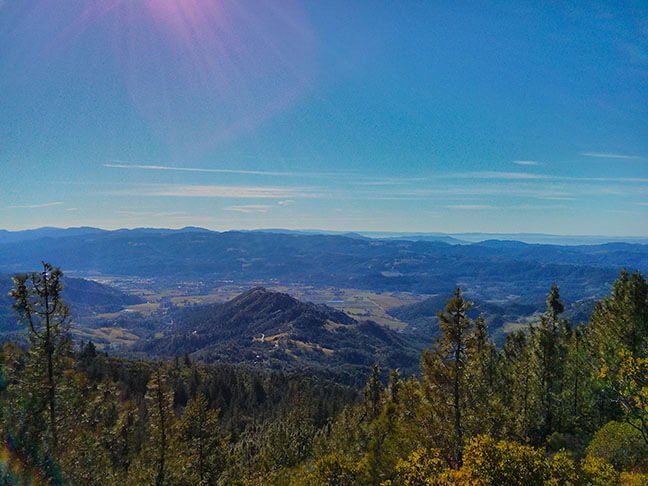 Mike and I had been sitting on top of a mountain high above Calistoga on the eastern edge of the Napa Valley, watching the sun set. It was Thanksgiving weekend of 1971 and we were staying in a cabin far below the ridge top that his friend Noah was living in. Noah was a hippie high school friend of Mike’s who made his living baking, bagging and selling his own personal brand of granola to health food stores which he called “Noah’s Famous Crunch.” Noah was away at his parent’s house in Tiburon for Thanksgiving and had loaned his cabin to us for the long weekend, but had left his large black Labrador retriever Hunter at the hillside hideaway for us to take care of. There was no trail up the mountain and we had climbed through thick pine and oak forests for a couple of hours, ascending with Hunter following right behind us. As we got higher we  bushwhacked through high desert manzanita and mesquite until we finally came to a rocky outcropping at the peak that we scrambled to the top of. We sat there admiring the vast view below us of rocky, undulating, thickly forested ridges and ravines and golden hills, tapering down far below to thousands of acres of wine grapes on the flat valley dotted with wineries. We watched the half moon rise and saw the twinkle of electric diamond lights begin to glitter on the valley floor, miles below us. In the fading twilight and gathering gloom we quickly realized that we had no flashlights, no trail to lead us back to the cabin and no idea how to return to our little cabin.
The moon cast very little light on our tangled predicament. We briefly considered spending the night on the mountaintop and waiting until sunrise to make our way down the mountain when Hunter got up and looked at us quizzically, at which point Mike said  “Just follow the dog – He’ll lead us back to the cabin.” Hunter led us and waited patiently for us many times as we stumbled through the tangle of desert scrub on the higher flanks of the peak. We slowly made our way into the dark arms of the forest, and a couple of hours later Hunter barked when we came upon a dirt road that led us back to the cabin, where we made a special Thanksgiving feast for our intrepid savior and new best friend.