Life among the Heathens 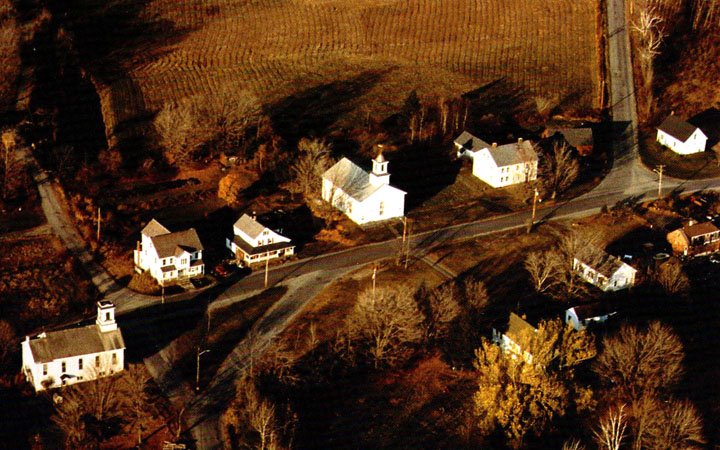 “ Missed you at church on Sunday. My cows got into the corn. It might rain. “

For the first several summers that we lived in rural Heath, Massachusets there were two general stores, one in Heath Center next to the church and town hall and the other in North Heath two miles away. My parents had recently purchased 50 acres of land high on a hilltop from my father’s friend from seminary, Bill Wolf, for $ 6 an acre. Bill had bought a 100 acre farm and offered half of it to my parent’s at a reduced price as a wedding present.

At the time the town had a population of about 250 souls, many of whom were dairy farmers. The “downtown” general store also contained the post office, the social hub and source of all known daily news or gossip for the entire town. The postmistress was the smart, affable and proper Esther Dickinson, daughter of one of the premier farm families in Heath, and a distant cousin of the poet Emily Dickinson. I always loved to read the wanted posters that were taped to the walls, detailing heinous crimes committed by the sorts of people who thankfully did not represent Heath’s more refined and morally grounded citizens. My mother liked to arrive early while Esther was sorting the mail to chat and to learn what was going on in people’s lives, hearts and minds. She often commented that people hoped to learn as much as they could about their friends and neighbors while revealing as little as possible about themselves, in a typically New England, “cards close to the vest” approach to social life.

As we were driving into Heath on a return trip from grocery shopping in Greenfield in the late 1950’s, we drove around the corner into Heath Center and saw the Heath Union Church’s golden steeple consumed with a pillar of fire. The church had been struck by lightning during Hormidas Lively’s wedding ceremony – an act of divine intervention if there ever was one, and the farmer brothers and volunteer fire fighter heroes Howard and Ralph Dickinson were up on top of the roof with axes, cutting into the roof to make space for a stream of water to spray into the burning roof rafters from a firehose.

The fire was finally extinguished, the church’s golden steeple was later rebuilt, (this time with lightning rods), the marriage lasted and Hormidas Lively went on to later become the Fire Chief of Greenfield Massachusetts, so some sort of divine plan was enacted and realized.

“ Only Peter Pan can get you there! “

When I was young, I listened to a British friend of my parent’s who was staying with us at our home in rural Massachusetts, asking on the phone for bus arrival and departure times. He was trying to get to Burlington, Vermont, a couple of hundred miles to the north. The agent told him “Only Peter Pan can get you there.” He hung up in frustration, thinking they were mocking him for his British accent, but he called back a few minutes later after learning from my mother that Peter Pan was actually the name of a bus line in New England, and was the only way to get to Burlington, other than walking or flying north powered by fairy dust.

“ Ma, show them the rock in the chimney that looks like a dog!“

When my father needed 10” x 10” beams for the vacation home my parents were building in western Massachusetts, we drove to the sawmill of Arthur Cook. He was a wizened older man, with the years hanging heavily off of his lean frame, living in a huge ancient unpainted farmhouse. He was missing a thumb from a sawmill or chain saw accident. He told my father that he would be happy to sell him some “sticks” which he would deliver to our hilltop. He lived with his elderly mother, who was over 100 years old at the time, and she told us that as a girl she had “wrapped bandages” for Union soldiers in the Civil War, certainly the only living person I ever met with a memory of that epic conflict. She pointed out a stone in their fireplace that looked like a hound dog after Arthur shouted “Show them the dog Ma! Show them the dog!” And it did indeed look like the profile of a dog’s head, forever sniffing the smokey air in their living room.

This linguistic turn of a phrase first came out as my relationship advice to Don Richmond in Heath, Massachusetts, in 1975. Don lived down the hill from us on a small farm. His divorced mother had recently married a farmer and Don had moved from suburban Virginia to a very rural dairy farm in a town that time had forgotten. He had befriended my house mate David, who nicknamed him “Lil Beaver,” perhaps for his energy, enthusiasm and youthful innocence. Don was a high school age artist, poet and sensitive soul and seemed to be pleased to find a household of worldly, college age friends just up the hill from his new backwoods home. Don was very interested romantically in the visiting, innocent and shy younger sister of Margie, who was living in our hilltop home.

Don was studying Eastern spiritual practices and told me that his goal was to be a “Paid Bodhisattva.” A Bodhisattva is a person who is able to reach Nirvana but delays doing so out of compassion in order to save other suffering human beings. In later life Don became a counselor to youth with substance abuse problems and an Episcopal priest, so his Bodhisattva practices continued on for a lifetime. He somehow forged a friendship with the English Archbishop of Canterbury. He loved Shredded Wheat cereal and one of his oft repeated favorite phrases from a poem he had written was “Zinnia Memory,” and to this day every time I see a zinnia in bloom I think of him.

“Spit on your worm after you put it on the hook – Everything in this world likes a little something extra.”

Leon Peters told me this, detailing his fishing secrets as we set out to catch bullheads in Rowe Pond from a rowboat piloted by my godfather, the theologian Murray Newman. Leon and his wife Phillipine owned the Peter’s Store, at the time the only store in Heath. Leon was a gruff alcohol enthusiast with a perpetual thirst, but he knew how to fish. He had an old wooden barrel outside of the store that he would keep the bullheads that he had caught alive in until he was ready to fry them up. He bred guinea pigs and rabbits in his large garage which he sold for scientific research purposes to augment his income from the country store.

Howard Dickinson, a farmer in Heath, Massachusetts gave this ironic, iconic greeting to a glider pilot after he had descended the 40 foot ladder that Howard had leaned against the shattered fuselage of his air plane which he had recently crash landed into the high canopy of a hardwood forest on the day before the Heath Fair in 1965.

It was always very important to present one’s animals to the Heath Fair judges in the best, cleanest, most well combed and mild mannered fashion possible if one wanted to take home a blue ribbon on Fair Day. To that end, one afternoon on the day before the Fair, Steve Wolf and I accompanied our dear farm boy friend Buzzy Stetson on a walk from his parent’s farm to another farm across an orchard, over a couple of hay fields and through a woodlot to borrow a couple of curry combs so that we could help Buzzy and his brother Mickey cosmetically brush and prep their yearling calves for the judging the next day.

As we walked through an apple orchard, we suddenly heard a weird high pitched whining sound as a massive glider swooped out of the sky over our heads, coming from the Burnt Hill area across a deep valley and unsuccessfully swooping down to try to catch an updraft. It made a tremendous crashing, crunching sound as it plowed into the forest canopy, at that point the loudest most disturbing sounds I had ever heard. We ran into the woods and found the plane sitting 40 or 50 feet high up in the treetops. The wings had been sheared off but the fuselage was mostly intact. We yelled up to the pilot who said he was not hurt but asked us to go get help. We told him we would and he said that he would wait up there and eat his lunch until help arrived. (An early example of grace under pressure for my young life. This guy had The Right Stuff for his present predicament!).

“Does she have her glasses on so she can see God when she gets to Heaven?”

The first funeral I ever went to was in the Heath, Massachusetts church when I was 5 years old. The service was for Vivian Thompson, the wife of our farmer neighbor Oscar Thompson. She was laid out in a blue checked gingham dress in a shiny coffin next to the altar, seemingly sleeping peacefully for eternity for all to see before her ascension to Heaven. She had her turquoise horn rimmed glasses on, which confused my young mind. I asked my mother if that was so she could see God when she got to Heaven.

“I am from Providence.”

Josh Huntington, the 90 plus year old father of Betsy Dyer with whom we were staying during our first summer in Heath, Massachusetts in 1954 often told my brother and me this. He spent most of his time reclining on a green velvet “fainting couch” next to a beautiful shaded rock garden. My brother and I had heard of Providence only in Biblical terms, knowing nothing of the nearby state of Rhode Island, and thought that he had somehow descended from Heaven to be with his daughter for the summer.