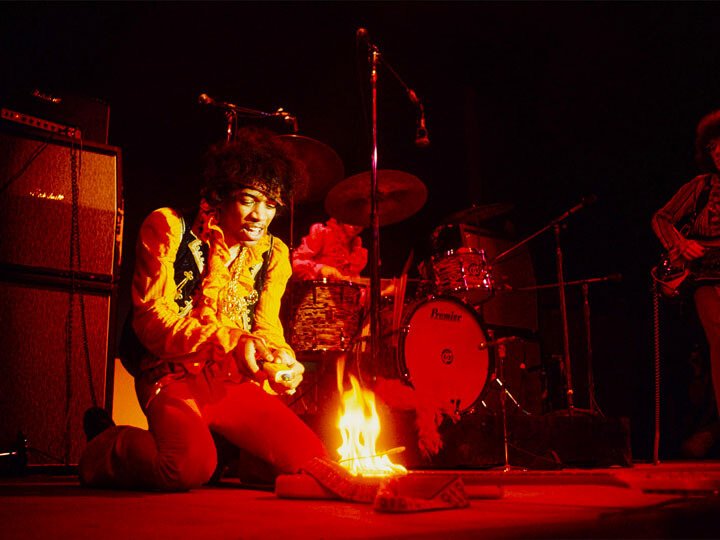 “I’m going to make the greatest sacrifice that a guitar player could ever make!”

Jimi Hendrix said this on mic, moments before playing “Wild Thing”, setting his guitar on fire, smashing it and throwing it into the audience at the Monterrey Pops Festival in June, 1967. I was in the audience at age 16: rapt, enthralled and unbelieving, not yet knowing that the Who was about to appear next, ready to destroy all of their instruments at the violent end of their set. Hendrix had lost the coin toss as to who would close the show that night and did his best to remain unforgettable for the rest of rock history.

“Well, I folded up my arms and I slowly walked away. I said, “Farewell honey, I’ll see you on the Judgment Day”

When I was 18 I saw and heard the very old delta blues master Son House perform at Stanford University. He was a tiny wizened old black man sitting alone on a white stool in a brilliant pool of light. He took a couple of slugs from a silver flask, hit a strong shimmering opening chord on his metal resonator guitar, opened his lips and out poured incredibly loud, scary fiery blues music from another world and another time. He became a giant in an instant, possessed by wonderful dark and grand musical spirits. It was the most powerful, instant and complete transformation I had ever seen of a human being. I was mesmerized by his whoops, wailings and the sharp, abstract staccato attack of his bottleneck guitar stylings.

The English guitarist and singer Martin Simpson was describing a charity event that he had been hired to perform at in mansion in New Orleans. While he was setting up before the event a young black woman came into the banquet room to be interviewed for a domestic position by the madam of the house. The young lady looked up at a grand painting on the wall and questioned the madam if it was a younger version of herself in the image saying “Is that y’all in the painting?” When the older woman said “yes” the job seeker responded “Lordy, Lord, ain’t time a wrecker!” Simpson did not know if the young lady was offered the position, but suspected that she did not get the job.

“You’ve got hip in your shake and shake in your hips.”

We were in Big Sur, going to hear our friend Jay’s band Wildebeest play at the Fernwood Resort, tucked away in a shady glade in the redwoods on the edge of the continent. When we arrived at the Fernwood the band was informed that there had been a booking error and that the Sacramento punk band “Dead Kitty” was going to play there instead of Wildebeest that night, but the band would still be comped for their rooms. At least both were animal bands. We helped them unload and when Jay walked into his room a bat was erratically and desperately flying around at high speed trying to find a more solitary cave as Jay ran out, a bizarre twist to an already strange day.

While we were helping the bat escape, Rusty, the band’s manager and never one to squander an opportunity, called the nearby New Age Mecca, Esalen Institute and offered Wildebeest’s services for free for the evening for a dance opportunity for everyone at Esalen, providing that the friends of the band that had driven down from the Bay Area could come to listen to the band. When we drove down to the Esalen gate a little later, the gate attendant knew nothing of this and made us wait while he made a series of anxious and angry phone calls, finally letting us in 15 minutes later.

We helped the band carry in their equipment and the large cliff side room quickly filled up with Esalen patrons who were there for an expensive New Age weekend. We danced the night away and at the break Wildebeest’s drummer, Louis, told me he had been watching me dance, and that I had hip in my shake and shake in my hips, the first time anyone had ever said such a thing to me. Later, after the band was through playing we were all able to walk over to the cliff side hot springs and soak the night away high above the waves crashing on the rocks far below. When we returned to the Fernwood, very late, Dead Kitty had gone to sleep and the bat thankfully had merged with the darkness and was nowhere to be seen.

“You bring a gallon bottle of Cribari and a girl who will bang everybody and then you get to the back of the line and see what the fuck happens next.”

My introduction to the world of hippie music began on a Saturday evening in October of 1966, when I was 15, on the roof of Stanford’s Student Union building above the bowling alley. My girlfriend Mary and I went to hear the Grateful Dead along with perhaps 200 other curious souls. There was a garishly painted old school bus parked below (“Furthur,” Ken Kesey’s 1939 International Harvester vehicle, later made famous by Tom Wolf’s book “The Electric Kool Aid Acid Test”.) When the Dead started playing I saw the ecstatic, acid infused swirling and twirling hippie dance styles of the Pranksters and Deadheads for the very first time. During the band’s break Mary and I talked to Pigpen, the band’s Hell’s Angel organist and singer. He was wearing the Angel’s blue denim “Colors” motorcycle jacket with a large death head embroidered on the back reading “Hell’s Angels, Frisco.” I asked him how one became a Hell’s Angel and he said that once the members thought you were up to their standards (usually after going on road runs for a year or more), there was a ceremony. The initiate had to bring a woman who was willing to have sex with all of the club members and a full gallon jug of Cribari wine. The members then lined up in rank order. The club leader, who was first in line, drank as much wine as he wanted and then put something back into the bottle (LSD, speed, Jack Daniels whiskey, more wine, urine or whatever else he wanted) and then handed the bottle down to the next member, who did the same thing, and so on until the prospective member who was last in line had to drink the full contents of the bottle and survive. If he did survive, he had earned the right to be an Angel, to ride with them and wear their colors.

This gem of musical insight was given to my friend Jay by the wonderful guitarist Tuck Andress (Half of the jazz duo Tuck and Patti which he performs in with his wife, Patti Cathcart). Jay was taking a guitar lesson from Tuck and asked Tuck how to improve his lead guitar playing and was told to “democratize the notes” a pitch perfect musical Zen koan that I have been trying to unravel note for note since Jay mentioned it to me several years ago.

Tuck and Patti – Time After Time:

“A squid eating dough in a polyethylene bag is fast and bulbous.”

I was pitching fresh cherry tomatoes to Dan McCann (Dan the Man) in my backyard and he was hitting them out of the park with a 3 foot long zucchini that he had just picked from my backyard garden when he shouted this Captain Beefheart quote from the song “Pachuco Cadaver,” just after getting a haircut from his girl friend Euphoria Victoria at the edge of the garden. Dan was a large man and had been the center for Stanford’s football team during his four years at that institution of higher learning.

He was also the bass player for the band Wildebeest at the time and spent the rest of his post-Stanford career as a touring and gigging musician in Austin and LA. Wildebeest had just recorded their first album at the Dead’s studio, Shakedown Street, in San Rafael California. Dan and I shared a love of the Dada-Rock stylings of Captain Beefheart and his Magic Band band mates; Antenna Jimmy Semens, The Mascara Snake, the Winged Eel Fingerling and Zoot Horn Rollo.

Captain Beefheart – Her Eyes are a Blue Million Miles:

I was at my aunt Betty McAfee’s 90th birthday party in Mill Valley California, singing along with the Leadbelly song “Good night Irene,” being led by her 88 year old friend Ronnie Gilbert of the Weavers, an influential folk-singing group that popularized the tune in 1950. The Weavers were blacklisted in the early 1950s, during a period of widespread anti-communist hysteria, because of the group’s left-wing sympathies. I got to sit next to Ronnie for the birthday dinner and cake ceremony and was told stories about the dark days of America under the shadow of McCarthyism and more joyful accounts of playing and singing with the folk icon Pete Seeger who performed with her and toured the world in the Weavers for several years.

These two statements concerning the ground of being and how to conduct one’s life were inscribed in tiny, fine point, felt tip pen print on thin lines of grout between ceramic tiles above urinals in a men’s rest room at the student union at San Francisco State University when I was getting my Master’s Degree in fine art there in the early 1980’s. The number of comments and tiny philosophical statements increased as the year went on, until the white grout turned back and one could collect enough pearls of wisdom to begin a PhD dissertation in Philosophy

“ Never be the opening band for an animal act. ”

De Witt was the bass player in my friend Jay’s band Plan B, which was performing for our wedding. Over champagne at the break he told me that he had opened for an animal act featuring trick performing chimpanzees when he was turning with Tiny Tim a few years previously. Tiny Tim (who ironically, was very tall) was a throwback nostalgia act in the late 1960’s. He played the ukulele and sang songs from the 1920’s in a quavering  high falsetto voice. His signature song was, “Tiptoe Through the Tulips.” He married Miss Vicki on The Tonight Show Starring Johnny Carson on December 17, 1969, with 40 million people watching, a small number compared to the 750 million people who watched Princess Di get married to Prince Charles in 1997.

Tiny Tim – Tiptoe Through the Tulips:

I heard Frank Zappa make this ironic and cynical statement about the state of musical journalism in an interview in the late 1960’s. Zappa was one of the most innovative and stylistically diverse rock musicians of his era, and was a strident critic of mainstream education and organized religion, and a passionate advocate for freedom of speech, self-education, political participation and the abolition of censorship. Like me, his doctors treated his childhood sinusitis by inserting a pellet of radium into each of his nostrils in the 1950’s, a procedure which later caused thousands of cases of cancer and perhaps hastened Zappa’s early death at the age of 53. His son Dweezil became a gifted guitarist and musician, and toured extensively playing his father’s complex orchestral compositions with a band as “Zappa plays Zappa,” using my son’s music teacher, Ronnie Crawford, as his drummer.