The Life of a Cowboy 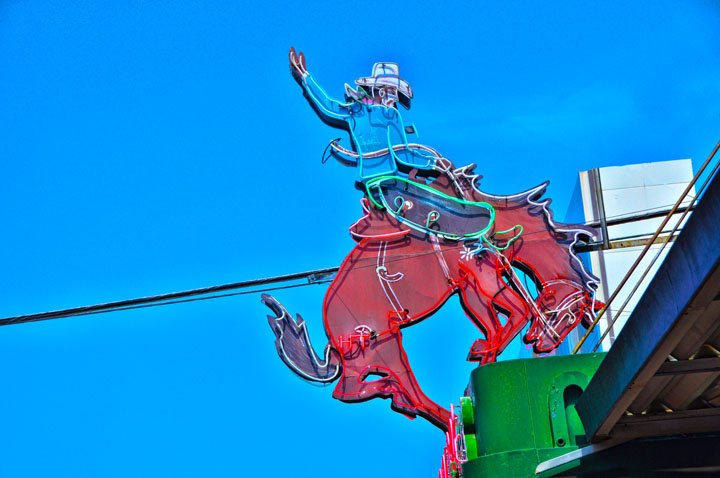 “I like the idea of Cowboy poetry, but I don’t need to hear any more of it.”

I was at a music festival in the Sierra Mountains and had just been told that there was a late afternoon performance event called  “Cowboy Poetry,” happening, appropriately enough, at the corral where dudes and dudettes normally gathered to take trail rides around the lake and up into the mountains. My brother in law Alan had just warned me not to set my literary expectations for Cowboy Poetry too high.

I wandered up the dusty trail, and set myself down on top of a split rail fence beneath the huge ponderosa pines, waiting for rhymes about buffalos, horses, endless skies and the open range, to spring forth from the minds and mouths of the assembled buckaroos.

While it was refreshing to see men in denim shirts with pearl buttons topped with 10 gallon hats, recite rhyming verses about the raptures of horsemanship. ‘lil doggies, roping steers and the freedom of the open range, I too was more enthusiastic about the idea of Cowboy Poetry than the spoken literary facts as they were assembled, recited, and presented by the California cowboys in the dust of that late afternoon.

“We’ll go take pictures of spiritual orbs – You can’t see them with your eyes but your cameras can capture them!”

Sedona Arizona, is a beautifully situated but sadly over developed, New Aged, red rock high desert town. It should have been protected as a State or National Park long ago, but it is far too late for that now. Too many tourist dollars have migrated into town to reverse that current monetary tide. My favorite locally named business there is called “Sedonuts.” There are many jeep tour concessions that will take you out into the canyons and mesa tops on very rough roads. I was visiting a friend there who set up an “Orb” tour for us. We set off in a pink jeep with “Cosmic Cowboy Bob” at the wheel, looking for “Orbs”, spheres of “pure energy” from the spiritual realm.  After a long, high speed, extremely bumpy, Orbless afternoon, Cowboy Bob suddenly drove us to the flat top of a mesa, drove around in circles at high speed, kicking up huge amounts of dust, abruptly stopped the Jeep and had us get out and take numerous pictures of the clouds of dust. We later looked at our screens and found we had taken many images of clouds of dust, but the photos were sadly, but unsurprisingly, completely free of Orbs or spectral or spiritual messages from the Beyond.

“Give me a home, where the buffalo roam and the deer and the antelope play; Where seldom is heard a discouraging word and the skies are not cloudy all day.”

My aunt Betty and her partner Audrey were sitting in a yurt in Mongolia on the edge of the Gobi desert, drinking fermented mare’s milk with a group of roaming herds people out on the vast grasslands. Their hosts were singing song after song about their nomadic way of life out on the steppes, an immense nearly flat area too dry to support a forest but too green, wet and watered to be a desert, perfect for the grazing needs of sheep, goats and camels. After singing several of their traditional anthems about their ancient way of life wandering with their livestock, they asked Betty and Audrey to sing them a song about the life of nomadic herding people in America. After a moment’s thought, they sang them “Home on the Range.”

Home on the Range is the official song of the state of Kansas. It was written by Brewster Higley in 1872 when Higley was a homesteader living in a small cabin near West Beaver Creek in Kansas. His friend Daniel Kelly wrote the melody on his guitar. The song was eventually adopted by ranchers, cowboys, and other western settlers. Over the years it has become the unofficial anthem of the American West. Bing Crosby, Frank Sinatra, Connie Francis, Burl Ives, Pete Seeger, Gene Autry, Steve Lawrence, Tori Amos and Neil Young have recorded it, among many others.

It has been featured in movies, video games and on the Simpsons and has been sung in cartoons by both Bugs Bunny and Porky Pig. It became more widely known when it was published in 1910 in “Cowboy Songs and Other Frontier Ballads” by the folklorist and song catcher John Lomax, who said that he learned it from a black saloon-keeper in Texas.

“I’m going to star in a TV show about a pioneer cowboy with a talking horse.”

Bob Denver was describing his next career move after Gilligan’s Island to me and my girl friend Sallie Dodge as we sat together in a motel room in Boulder, Colorado, drinking Coors, the iconic, pale, tasteless Colorado beer from the nearby town of Golden. Sallie’s roommate, who Sallie had met in her prep school in Switzerland, was Denver’s partner at the time.

Bob was best know as “Gilligan” for his role as the bumbling first mate among a small group of shipwrecked castaways in the show “Gilligan’s Island”, but I knew him much better from his earlier role as Maynard G. Krebs, the teenaged beatnik best friend of Dobie Gillis on “The Many Loves of Dobie Gillis” a TV show that ran from 1959 to 1963 on network TV.  On that show he was a comic beatnik oddball and played the bongos, collected tinfoil and petrified frogs, and commented ironically and comedically on the problems of his best friend Dobie’s love life.

My brother Peter and I loved the show and watched every episode on our tiny, static plagued snowy 15” black and white TV. I was stunned to be sitting in a room drinking beer and chatting with Maynard G. Krebs, one of my childhood comic heroes. He seemed sweet, smart, funny and sad and drank most of the 6 pack of Coors by himself that night.

“ Let me check with Captain Bill, Mick, Joncum and the Three Indians first and then I will let you know.”

For a short time when I was a child I had three pretend friends who would accompany me everywhere and upon whose advice I often depended. They were the cowboys Captain Bill, Mick, Joncum and their friends the Three Indians.Many years later I found out that at about the same age my wife Karen had three pretend friends who were named Hopoke, Mokus and Pimpsa. I want all of them to meet at a pretend party and become real best friends.

After a day of hiking at the red rock wonderland of the Pinnacles National Park park, my brother Tom asked me what the “Slinky, sideways, backwards, cowboy music” I had just put on the CD player was. It was a Bill Frisell tune entitled “Alien Prints,” which was well named for its unique, though familiar strangeness, and combinined reggae, jazz and country music and was liberally salted with sprinkles of cosmic fairy dust.

“If there’s beefs out on the road, call up Tiny Mendoza.”

My friend Paul was given this advice and had to make the call to Tiny Mendoza, the ironically named Portugeese ranch manager who managed the herds of steers that often escaped onto Page Mill Road, near the former 17 acre Russian Orthodox Nunnery that we were living in at the time. Paul had almost run into Tiny’s escaped herds of beefs while driving his BMW motorcycle home late at night. Ken, another of our housemates had run into a deer on his motorcycle on the same road, so the danger was real from feral or domesticated creatures.