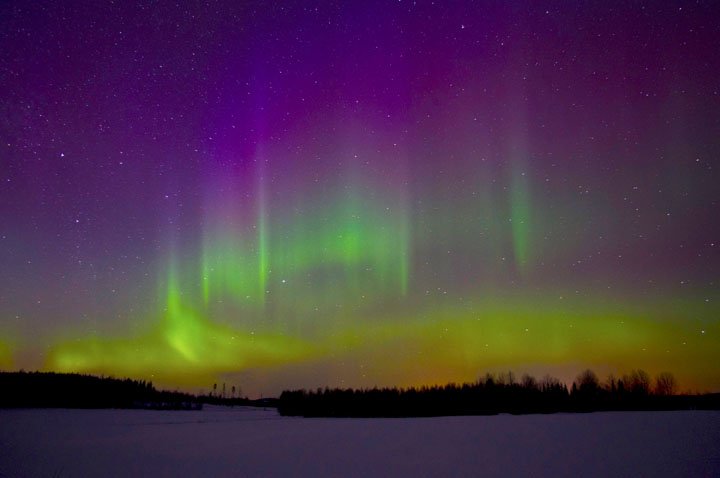 We were laying in bed in a remote corner of Iceland inside of a tiny cabin, trying to get some sleep after a long day of travel when we began to hear voices outside of our lodge, which was on the edge of an uneven, rocky lava field. It seemed like a very unlikely place for people to gather and chat out in the darkness near midnight, when it occurred to us that they must be looking at the Northern Lights. We got dressed and walked out into the rocky plain and looked upwards; It seemed like a phosphorescent green celestial forest fire was raging in the Heavens, rising from the low Northern horizon and fanning out with wide tendrils sweeping all the way across the vast dome of the sky; pulsating veiled lighted dramas mysteriously lit from within and ever changing.

All of my life I had wanted to see the Northern Lights, and the fact that we were able see them three nights in a row under clear skies was an unexpected and magical blessing. Everything in Iceland is on a scale that dwarfs all other landscapes that I have ever seen or walked through. All is vast, beautiful, enormous and otherworldly.

“ Look, there’s a dolphin flying through the clouds! “

I was hiking high atop a ridge at the Pinnacles National Park on a cool and windy winter day when I looked up and saw a dolphin flying through the gathering rain clouds. It seemed like an unlikely transition and transformation for a sea creature to have moved from swimming in the Pacific Ocean 20 miles away, to flying hundreds of feet above the jagged spires of rock at the top of the Pinnacles. My friend Steve did not believe me at first, but after pulling out our binoculars we both saw that there was a silver and blue mylar dolphin shaped helium balloon, about 5’ long, elegantly scudding through the skies above us, pushed eastward by a strong wind.

Life is the intersection of spirit and matter. Normally one sees a quartet of avian species riding the twisting and convoluted winds at the top of the Pinnacles; raptors with their cruel beaks, ravens rustling their wing feathers, black and shiny as obsidian, swifts darting by inches overhead with whooshing supersonic accuracy and acrobatic cunning, and flocks of pigeons dancing in mid air, splashing light off of their wings, moving through the blue air as one heartbeat and suddenly coming to rest on vertical cliff faces, blending into the rock as speckled feathers of white and gray and quickly disappearing into camouflage. A flying dolphin was a decidedly new species plot twist in the pantheon of airborne creatures soaring above us.